20 Best Things to Do in Athens, Greece

Athens has stolen our hearts and our bellies! As a kid, I always loved learning about Ancient Greece, so it was so cool seeing the ruins in person! As an avid traveler, I know many say to skip Athens, however, I highly recommend spending at least a day in the city! We spent 4 days in Athens, and didn’t feel like it was too much. In this Athens travel guide I am covering 20 of the best things to do in Athens, Greece. 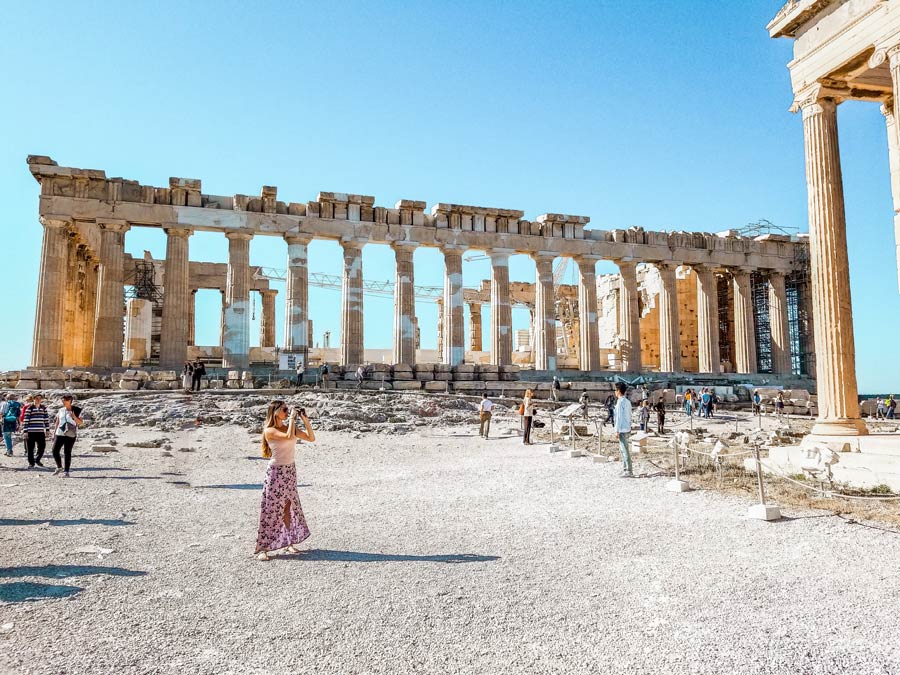 Disclaimer: This post may contain affiliate links where I may make a small commission at no cost to you. Disclosure

Did you even visit Greece without stopping at the famous Acropolis? The best tip I could give you is to arrive for the opening, which is 8 AM. If not, you’re likely to hit huge crowds.

If you plan on spending 4 days in Athens (like me), I’d recommend getting the 3-day pass; it’s worth it! The pass also allows you to see tons of other ruins all around Athens!

Once you go through the gate, get ready to explore the Odeion of Herodes Atticus, Parthenon, Athena Nike, and Erechtheion, just to name a few ruins. It’s truly breathtaking and, by far, one of the best things to see in Athens! 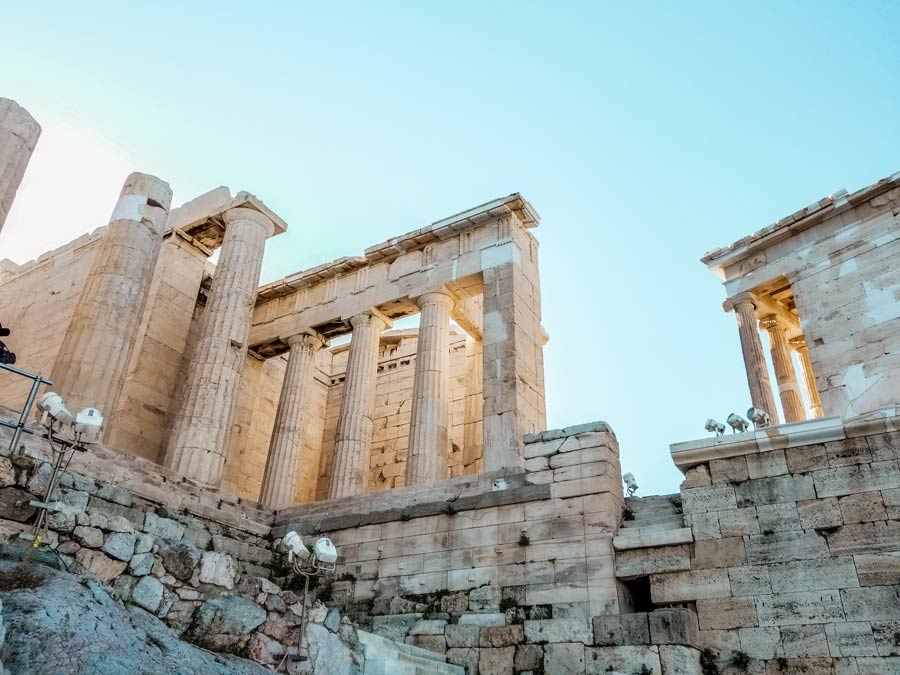 Ready to walk in the footsteps of champions? With just a 5 euro admission, enjoy access to the entire stadium and a headset that provides the history as you make your way around.

Get ready to walk up the giant marble steps, sit in the royal marble chairs, run down the track, stand on the pedestal of champions, and (my favorite) walk down the tunnel where so many athletes had walked before!

If that wasn’t cool enough, through the tunnel is a room that holds all the Olympic torches! Oh, and did I even mention the amazing views of Athens you will see when walking up the Panathenaic stadium?! The Panathenaic Stadium easily makes the list of the best things to do in Athens!

Close to the city center, you should be able to easily walk here. There are also bus and train stations nearby.

Fun Athens fact: The Panathenaic stadium is the only stadium built completely of marble! 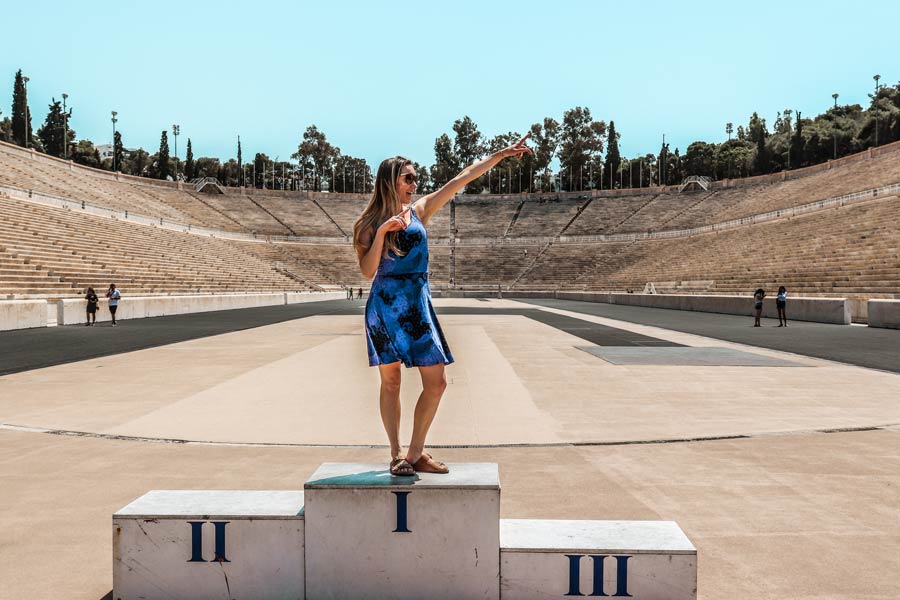 The Temple of Olympian Zeus was by far one of my favorite ruins in Athens. I love the details of the Corinthian columns, the little wildflowers growing around them, and all the space to walk around the columns.

Did you know the Temple of Olympian Zeus was one of the largest in this time era? The temple originally consisted of 104 columns (20 columns on the side and 3 rows of 8 on the end).

Around 5 AD, deterioration started due to natural causes and human activity, and of the original 104 columns, 16 had survived until 1852, when a storm made one column fall over. It can be seen lying on the ground now. You can also get a glimpse of Hadrian’s arch and gate.

Next, explore the compounds of the Ancient Agora of Athens, also known as the Athenian Agora. Agora means marketplace, so this historical site played a huge role as an economic center in ancient times. This is where the wealth and influence of classical Athens were visible.

The Agora was also a spot for ancient Athenians to hang out and conduct business. This is also where the famed philosophers doused their listeners with wisdom such as Socrates.

You can find many statues and ruins throughout the Agora, making it one of the best places to see in Athens! 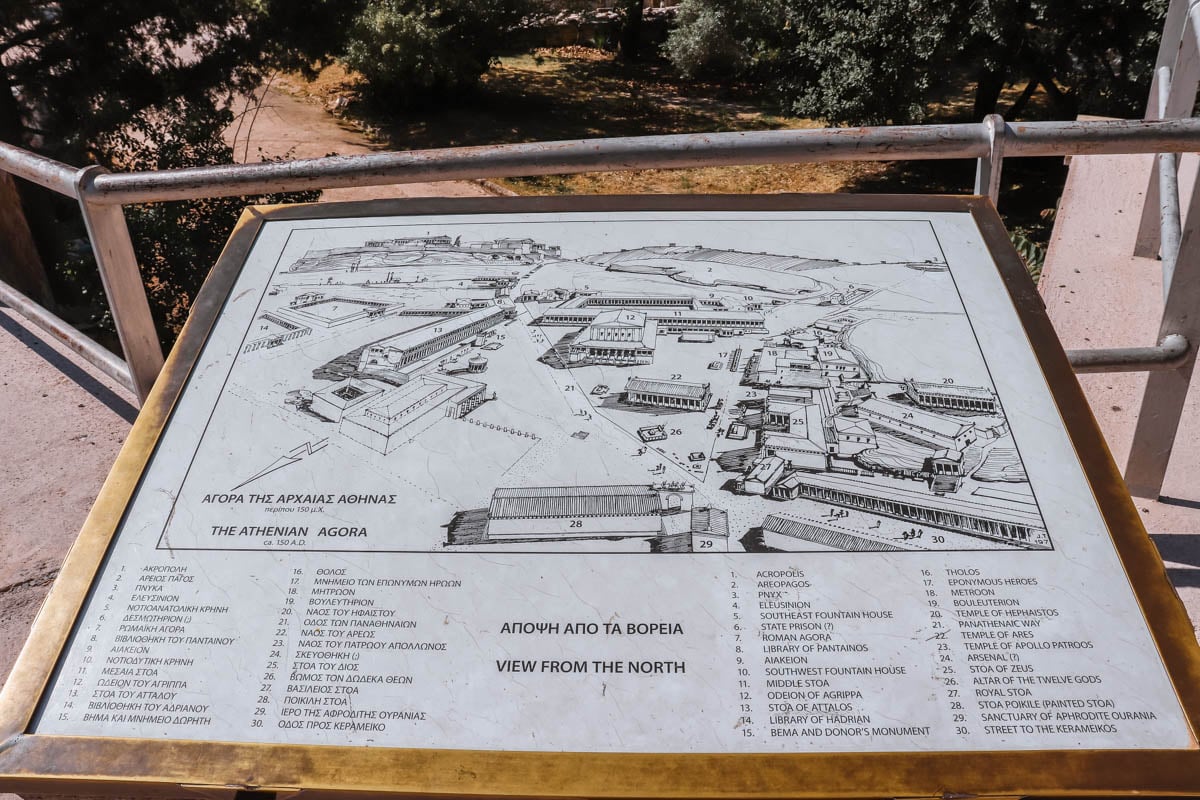 The Temple of Hephaestus is located north-west side of the Agora of Athens, on top of the Agoraios Kolonos hill. It is in walking distance, maybe 5 minutes, so you will definitely want to stop. The views are lovely! This temple is dedicated to Hephaestus, who was the god of blacksmiths, craftsmanship, and fire. 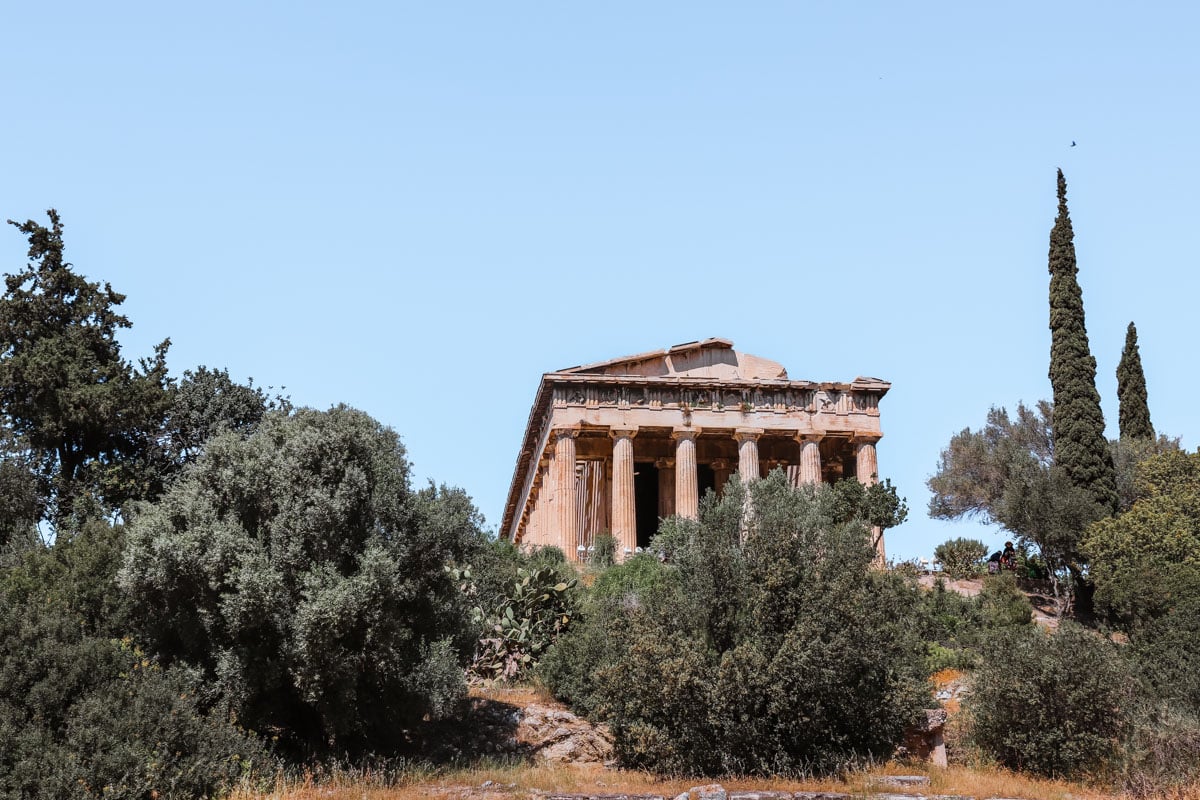 While here, you can also visit the Stoa of Attalos, which is found inside the Athenian Agora. The Sota of Attalos is a beautifully lined column building with pieces of artifacts displayed throughout the space. The Stoa was built by King Attalos II of Pergamon around 150 B.C. 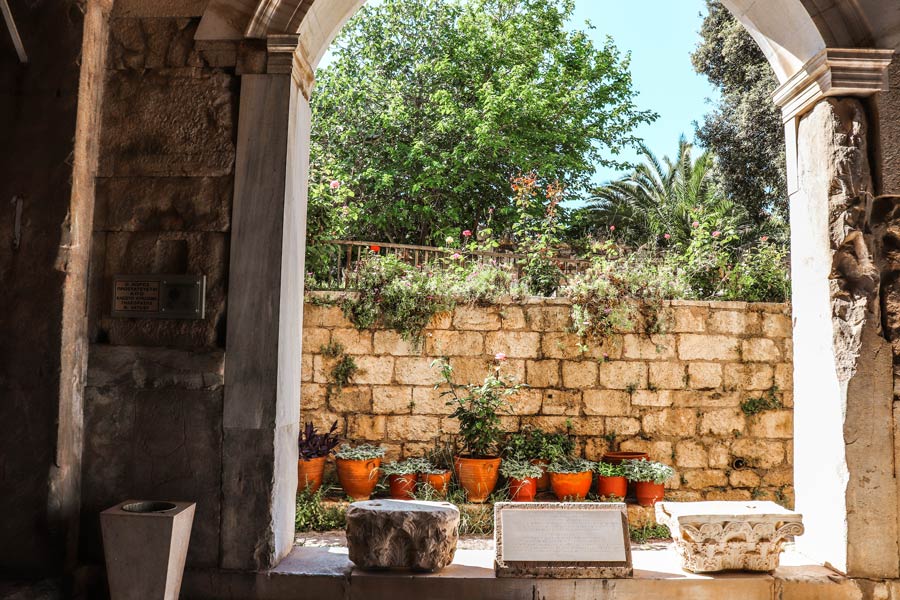 I now welcome you to Hadrian’s Library. The marble is so blinding here, don’t forget your stunna shades. In the same area, you will also see the Church of Saint Asimatos and Tetraconch Church. “It was built according to the view by Hercules the Perfect of llliricum (AD 407-412) or by the Empress Eudocia, former Athena’s daughter”.

This spot is full of history and lots to see with instagramable views. It was also way less crowded than the Acropolis! 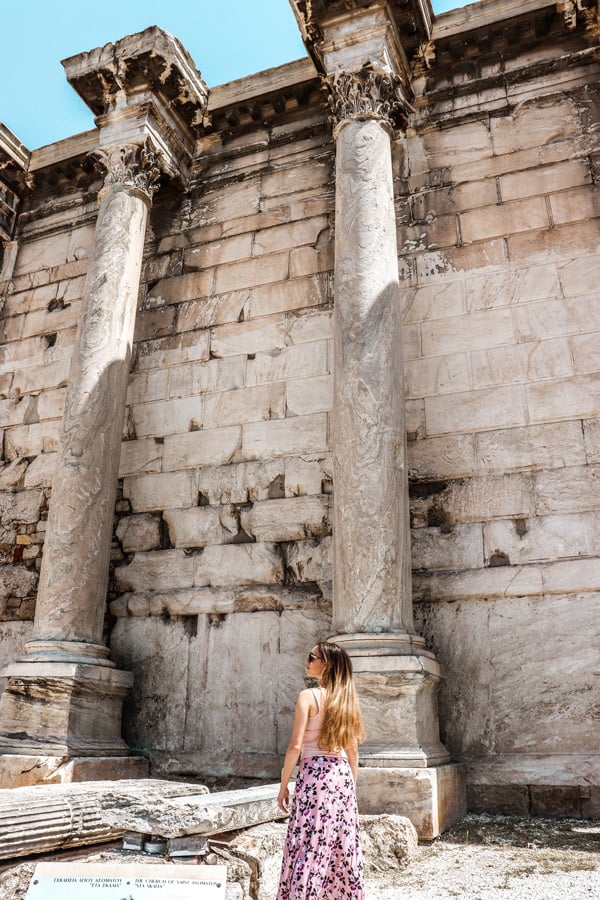 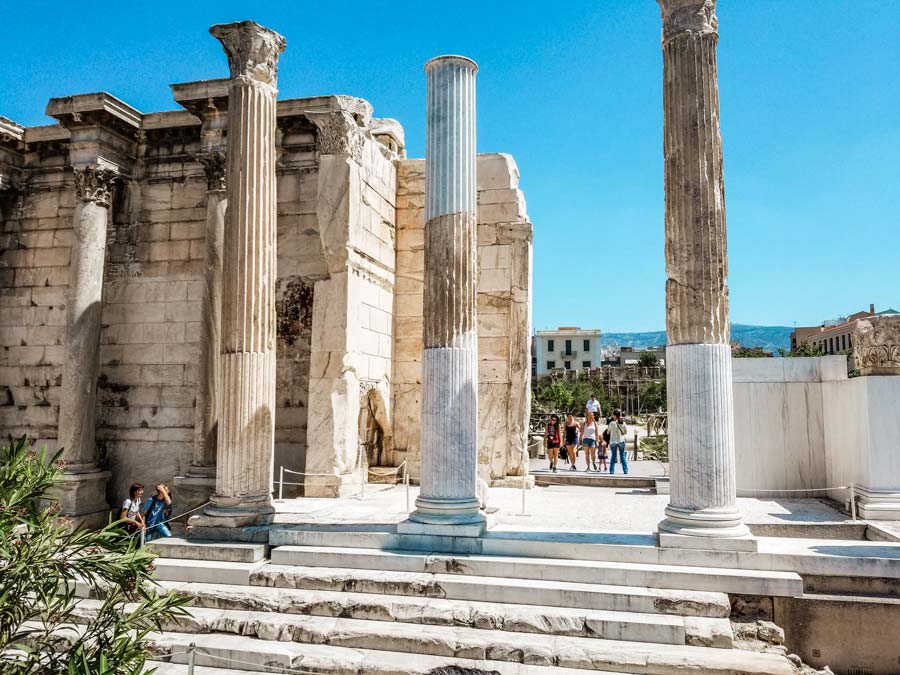 If you visit any museum in Athens, let it be the Acropolis Museum! The entire museum is built above the Makriyianni settlement with concrete columns. The ground level features a glass floor to enable views of the archaeological grounds below.

Marvel over some of the most important Ancient Greece treasures while here!

Some of the top things to see at the Acropolis museum include:

Address: Dionysiou Areopagitou 15, Athina 117 42, Greece, admission is 5 euros ( some days out of the year are free!), and hours and dates for free admission, click here!

9. Explore the Monastiraki Flea Market and Streets of Plaka

This list wouldn’t be “the best things to do in Athens” without including exploring the streets in Athens. Don’t know what to buy in Greece You will find lots of great shopping including souvenirs and amazing traditional Greek Food around the Monastiraki Flea Market.

Tip: Don’t forget to stop by Hans and Gretel Sweets for the most amazing waffle ice cream cones or wander down the most picturesque streets in Plaka. If you’re around during sunset, stop into one of the many rooftop restaurants for an amazing view of the Acropolis all lit up!

After, head to the charming Plaka neighborhood for a more upscale vibe, and some colorful painted allies. 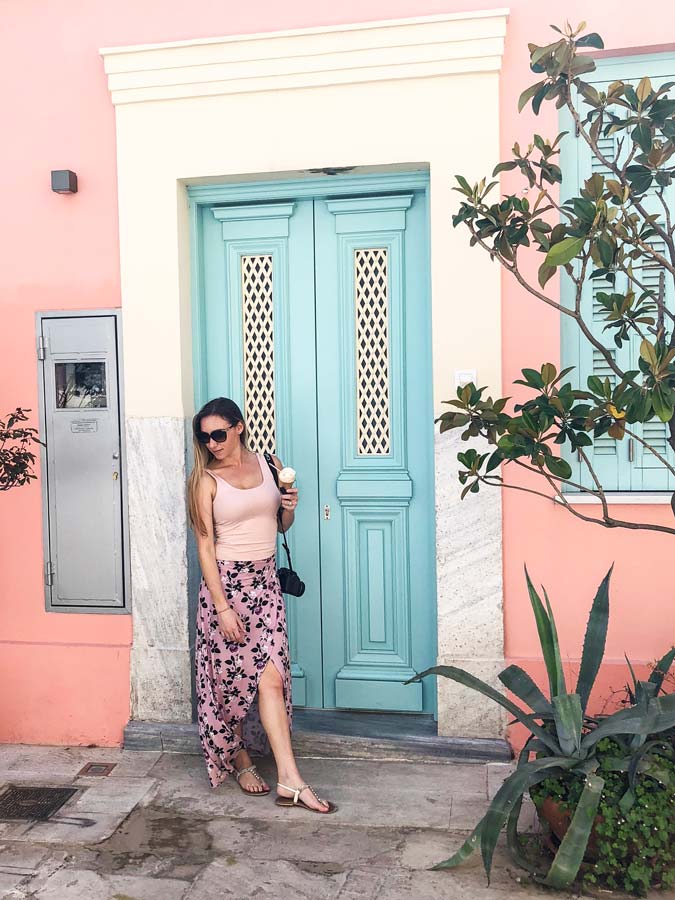 10. The Church of Panagia Kapnikarea

The Church of Panagia Kapnikarea, also known as just Kapnikarea, is located right in Plaka and known as one of the oldest churches in Athens.

Another one of the best things to do in Athens is the Areopagus. Enjoy an amazing sunset located right below the Acropolis! The Areopagus rock offers panoramic views making it perfect for the most epic sunset.

Just as an FYI, this spot is usually crowded, but with reason! You will find locals and tourists alike taking in the views from here.

12. Enjoy a Rooftop Bar in Athens at Night

After the sun goes down, enjoy a great dinner with views of the Acropolis all lit up at night. There are tons or rooftop bars and restaurants to choose from if you don’t have a reservation. We walked around the Monastikraki Square area until we found a restaurant that had room. The food was great and so were the views. 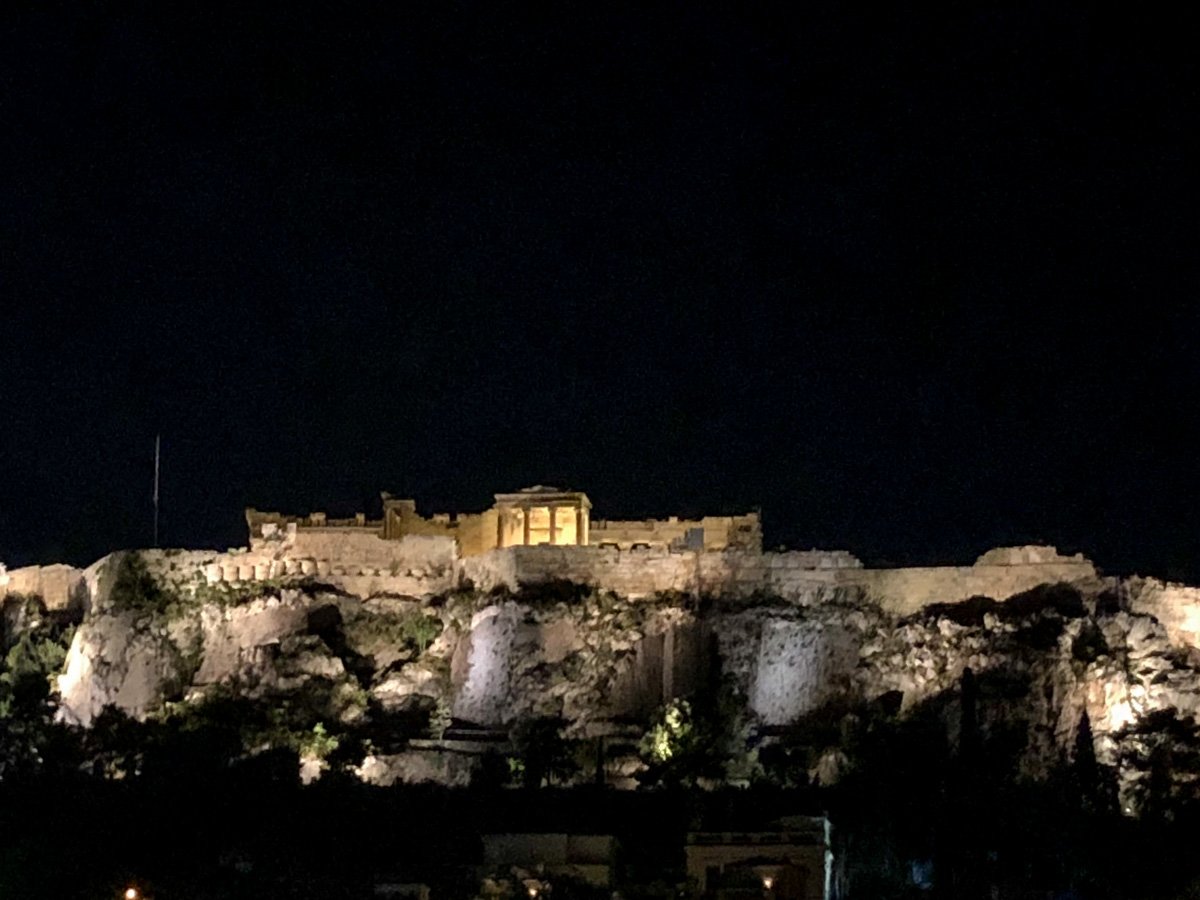 You will easily be able to recognize Monastiraki Square by the checkered like cobblestones. This is a extremely popular area, so it gets crowded. Since it is located in the middle of the ruins, you will likely pass through without even trying to. This is also where you will find a lot of locals trying to sell you stuff.

It is an iconic area, but because it is so crowded, be cautious of your belonging. You can also enter into the Monastriaki Flea market, which I will be covering below.

Known as the largest archaeological museum in Greece, The National Archaeological Museum of Athens is another top thing to do when visiting Athens. The museum was founded in the 19th century and one of the worlds most important museums dedicated to Ancient Greek Art.

Additionally, they have an extensive jewelry collection and Egyptian exhibit. Make sure to see the Kore and Kouros, The Horse and the Jockey, and the bronze statue of Zeus or Poseidon. 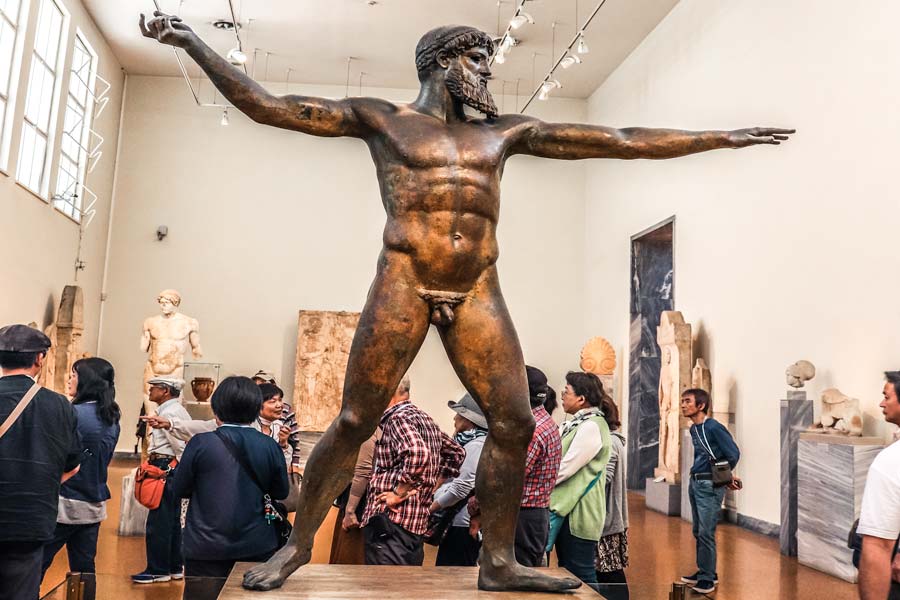 For one of the best views for all of Athens, head to Mount Lycabettus which is the highest point in the city. The view sits 277 meters above sea level. There are 3 ways you can reach the top, which is by cable car, on foot, or having a car drive you to the top. To take the cable car, it cost 10 euros per person round trip.

The best way to get to Mount Lycabettus is by taxi. It should not take more than 10 minutes from the city center.

16. Tomb of the Unknown Soldier

Located in Syntagma Square, the Tomb of the Unkown Soldier is a war memorial dedicated to the Greek soldiers killed in the war.

The memorial was sculpted by Fokion Rok between 1930 – 1932. When you visit, you will see the tomb is guarded by Evzone soilders.

Built between 19-11 BC, the Roman Agora is easily another top attraction to see in Athens. Located about 5 minutes from the Erechtheion, you can walk through these ruins that were built by the Romans. It’s a large open space with pieces of Doric columns and some arches.

You can walk right up to these ruins, and marvel at them, but remember to not climb or touch them! If you want to see more fascinating artifacts, head over to the Benaki Museum. Here you will find prehistoric, Ancient Greek, Roman art, and more. They are open every day except Tuesday and are located near the National Garden and the Hellenic Parliament. Tickets are 12 euros per person.

19. Changing of The Gaurd in Athens

Located near the Temple of Zeus, The Zappeion is an iconic landmark in Athens. The building is generally used for ceramonies and event. Walk in to see the courtyard, and grab pizza nearby at the Aegli Cafe. 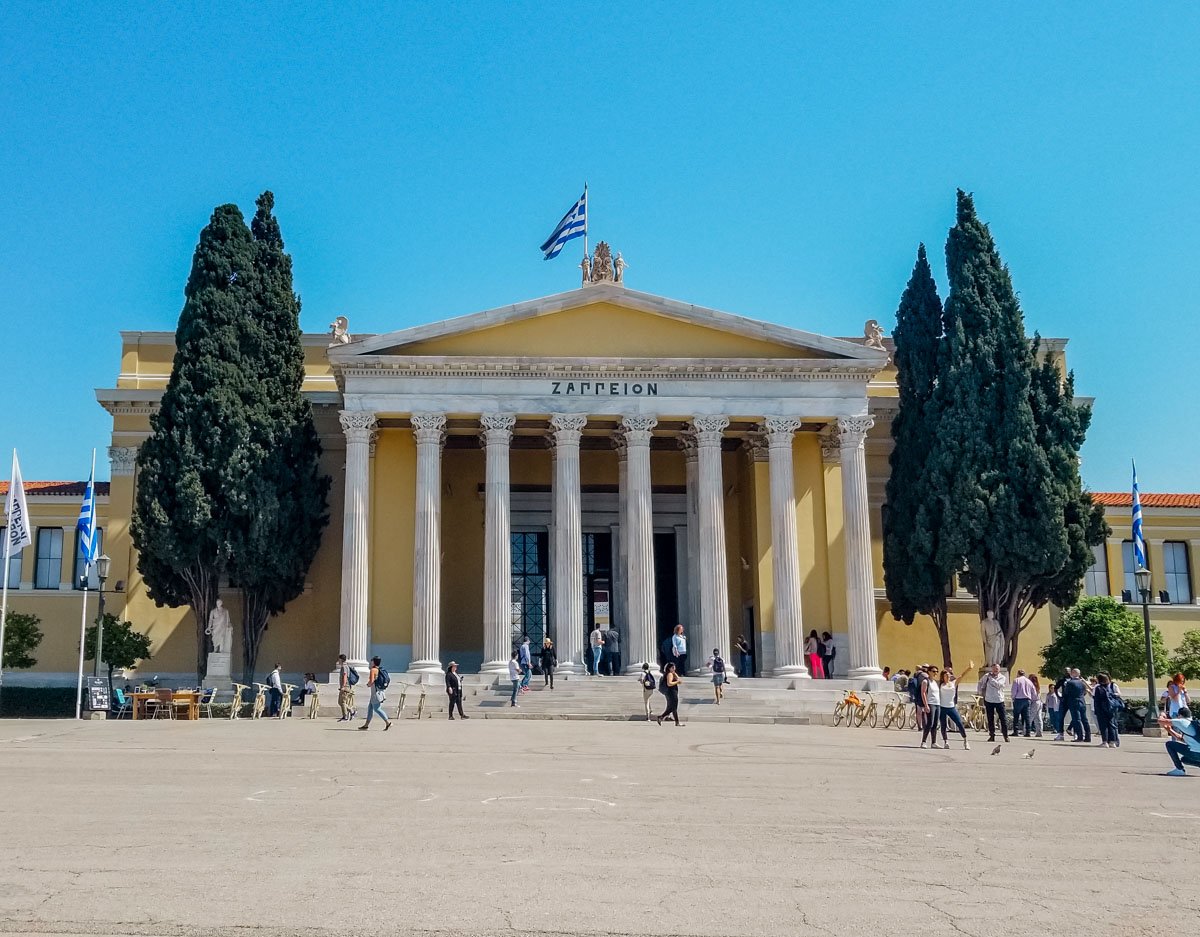 Best Way to Get Around Athens, Greece

The best way to explore Athens is on foot! The main attractions in Athens are all relatively close. Additionally, you can take their subway system, which is easy and very clean. You can also use the bus system or hire a car.

I would not recommend renting a car while in Athens.

Best Things to do in Athens Wrap-up

This concludes the best things you should do during your time in Athens, Greece! I hope you have the best time exploring this historic city. If you have any questions, or feel like I missed something, please let me know in the comments below.

Other guides you may enjoy: Best Things to do in Paris | 4 Amazing Days in Rome | 2 Days in Edinburgh Scotland | Epic 4 Days in Iceland

Enjoy these Best Things to do in Athens? I’d love it if You share it below! 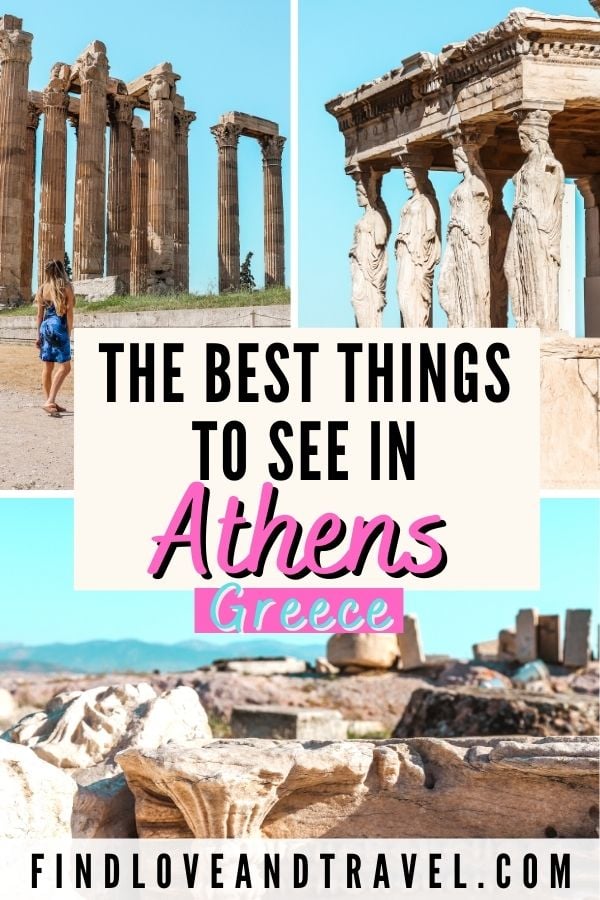 10 thoughts on “20 Best Things to do in Athens, Greece – Especially First-timers”