15+ Best Things To Do In Old San Juan, Puerto Rico

Puerto Rico has easily become one of our favorite Caribbean destinations. During your trip to Puerto Rico, Old San Juan is a must on any travel itinerary! From charming streets, ocean views, history, and more, Old San Juan has a lot to offer. In this guide, find some of the best things to do in Old San Juan, Puerto Rico!

Disclaimer: This post contains affiliate links. I may receive a small commission at no cost to you. Disclosure

El Morro Fort is easily one of the best things to do in Old San Juan. This historic UNESCO World Heritage Site was built between the 16th and 18th centuries.  Founded by Spanish settlers, this fort was designed to help protect Old San Juan from intruders including pirates!

In 1898 Puerto Rico was taken over by the United States after the Spanish American War. El Morro was then actively used by the military during World War I and II.

Finally, in 1961, El Morro Fort was retired and turned into a National Park and Museum that we get to enjoy today.

During your visit, enjoy sweeping views of the ocean while exploring the history of the Fort. You can even enjoy a picnic on the giant front lawn like many locals.

Admission: $10 USD and is valid for 24-hours to access both fortifications. Children (15-years and younger): Free

It was considered the largest fortress built in the Americas at the time.

Admission for El Morro or Castillo San Cristóbal will give you entry into both forts, so you only need to pay the one admission fee.

One of the most photographed streets in Old San Juan is Fortaleza Street. The decorations change, but this is where they have hung the umbrellas, kites and now giant Puerto Rican Flag.

Leading to the gates of the Governor’s house, La Fortaleza, you get to see both in one shot! It is also one of the most Instagrammable places in Puerto Rico.

If you love murals, visiting The Black Puerto Rican Flag Mural is another one of the best things to do in Old San Juan. The flag is painted on the door of an old abandoned building. The mural imagery stands for Puerto Rico’s fight against the collapse of the educational system, healthcare workforce, and more!

Did you know the Old San Juan is said to be the birthplace of the Pina Colada? That’s right and you can have one at the restaurant that is said to have invented it, Barrachina!

The Pina Colada is actually the Offical Drink of Puerto Rico! 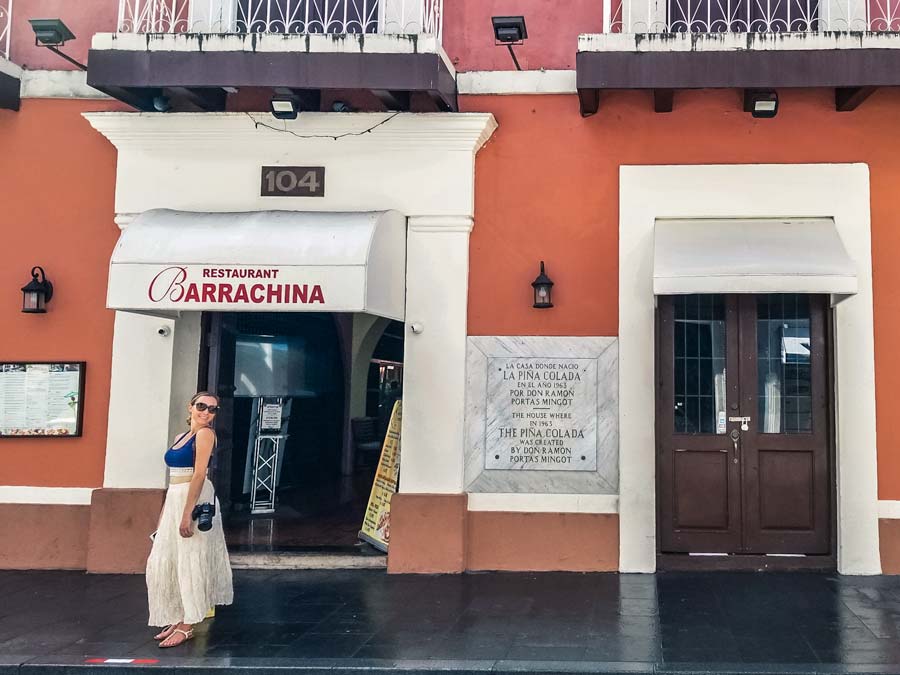 Walk Around the Streets in Old San Juan

The most charming streets in Puerto Rico can be found in Old San Juan. From the metallic cobblestone streets to the brightly colored homes, you can get lost just walking around!

If you love pastel Caribbean homes with Spanish influence, it is another one of the best things to do in Old San Juan!

In general, Old San Juan is extremely walkable, so you don’t need a car. Actually, I would recommend against a car in Old San Juan since the streets are narrow and parking is almost impossible.

If you do need a ride somewhere, Uber has a good presence in Old San Juan and the cost is affordable.

Some of my favorite streets around Old San Juan include:

Down your way from Caleta de Las Monjas street, find Palzuela La Rogativa. This small plaza offers a sweeping viewpoint of Old San Juan. From Palzuela La Rogativa, you can see the ocean right below you, as well as the back of La Fortaleza, and even El Yunque Rainforest from a distance.

You will also see the sculpture that commemorates a women-led religious procession that took place in 1797.

The Plaza Del Quinto Centenario is a charming plaza near El Morro fort. It was built in 1992 to honor Columbus’ first voyage.

In the middle of the plaza, you will find a tall clay monument known as an El Tótem Telúrico. It is made to symbolize the origin of a new world. There is also a splash area that comes in handy from the high humidity in Old San Juan if you are looking to cool down!

Save a Gato in Old San Juan

Do you love cats? Find a cat rescue at Save a Gato, where they take care of the stray cats of Old San Juan! As you start getting closer, you will see an abundance of cats in the area.

We knew we were getting close when walking down Caleta de las Monjas street. Additionally, the area also provides views of the ocean and La Fortaleza (the official residence of the Puertorican Governor). 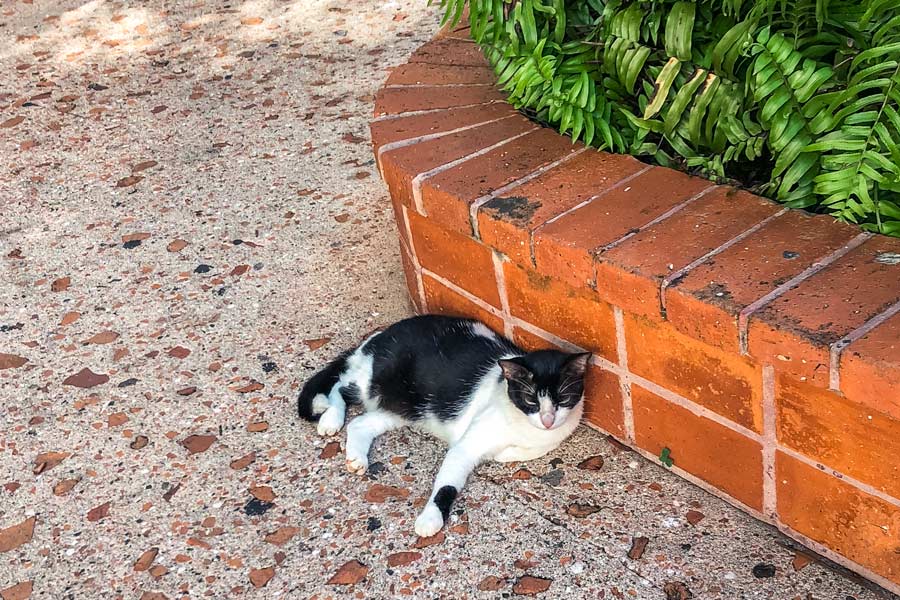 Even if you are not staying at the luxurious Hotel El Convento, it is worth a visit. This hotel is known as one of the most Instagrammable hotels in Old San Juan and they are also known for their great dining options. The surrounding areas of the hotel are also known as a top photography spot with pastel buildings and an alley full of plants!

Another cool mural in Old San Juan is the Callejon de la Puerta Bandera Painted Puerto Rican Flag Door. As you might have already noticed, Puerto Rico loves showing their flag off! So here you will find a large Puerto Rican Flag Mural on a door.

Ok, so Casa Bacardi might not be directly in Old San Juan, but it is close enough! Did you know Bacardi Rum is still a family-owned business? On top of that, Casa Bacardi is the largest Rum Distillery in the World and it’s right in Puerto Rico!

Even if you are not a big drinker, I could still recommend Casa Bacardi. You get to learn about the history of the company along with learning the process of how rum is distilled.

We scheduled a historical tour on Bacardi’s website and it lasted about 45 minutes, so you will still have time to do other things in Old San Juan! 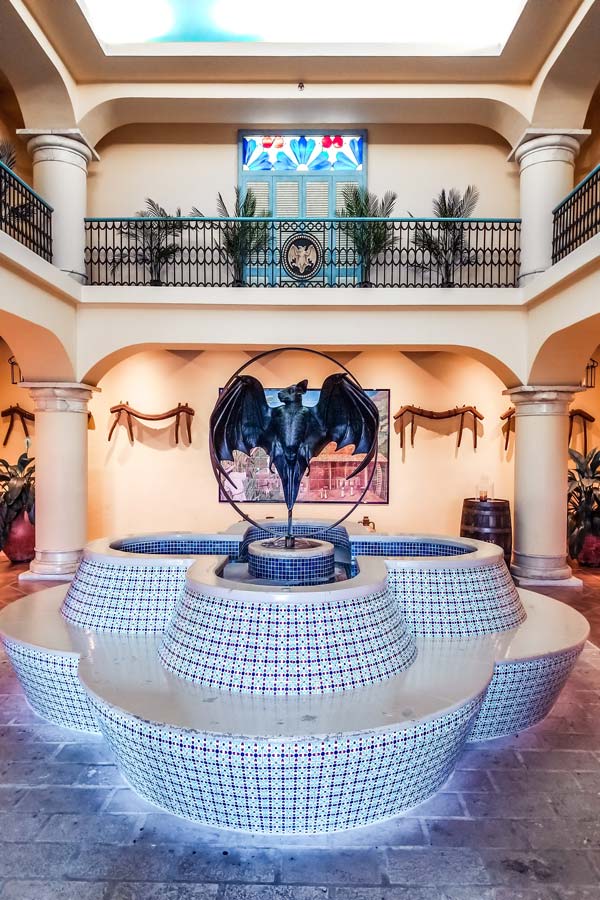 You can’t talk about the best things to do in Puerto Rico without mentioning the beaches! In Old San Juan, the most popular beach to visit is Condado Beach and Escambron Beach.

If you don’t mind going a little outside of Old San Juan, I can highly recommend Isla Verde Beach in Carolina. There are tons of restaurants, big hotel chains, and a large public beach!

Known as one of the most beautiful Cemeteries in Puerto Rico is the Santa María Magdalena de Pazzi Cemetery. The cemetery has some of the most prominent people of Puerto Rico buried there and overall just known to be very pretty (even for a cemetery).

You can even see it from El Morro Fort if you don’t feel like going all the way to it! So if cemeteries don’t creep you out, it’s another one of the popular things to do in Old San Juan.

Old San Juan has tons of shops all around the City. We personally like to get a painting from every place we visit since its small, easy to pack and makes good decoration in our home.

Now that you know some of the best places to visit in Old San Juan, here are some additional travel tips.

As mentioned before, you do not need a car while traveling around Old San Juan. If you do plan on exploring more of Puerto Rico, I would then suggest renting a car.

If you are not renting a car, you can take a taxi from the Luis Muñoz Marín International Airport (SJU). It is about 25 minutes away from Old San Juan.

Where to Stay in Old San Juan

There are a plethora of great places to stay in Old San Juan! Here are some of the best hotels in the area to consider staying.

This property includes a private beachfront on 17 acres of tropical gardens. Its unique location is perfect for beach lovers! Booking.com | Hotels.com

Known as one of the most photo-worthy hotels, Hotel El Convento is located right in Old San Juan. Here you are within walking distance to everything in the Old City and 15 minutes from the airport.

Another beautiful property right in the heart of Old San Juan with beautiful details and interior. Booing.com

The Condado overlooks both the lagoon and the Atlantic Ocean with 4 onsite swimming pools. Considered a high-end 4 Star hotel. Booking.com | Hotels.com

The Dreamcature is San Juan’s only vegetarian hotel. This is the perfect place for someone looking for a unique boutique hotel stay that puts a lot of thought and care into the environment and their guests! Check prices here!

Additionally, if you are interested in staying in an airbnb, here are some of the best airbnbs in Puerto Rico.

Wrap-up: Best Things to do in Old San Juan

As you can see, there are tons of things to do in Old San Juan, Puerto Rico. I hope this guide has inspired your trip to Old San Juan!

You may also be interested in: Travel tips to know before visiting Puerto Rico and the best things to do in Puerto Rico.

Love this Old San Juan Guide? Pin/Share it below!